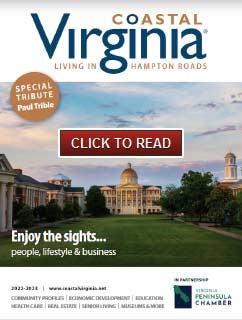 Many people do not know where the James River ends.

The U.S. Postal Service changed its postmark for “Tidewater, Virginia” to “Hampton Roads, Virginia” beginning in 1983. The Norfolk side has the Naval Station Norfolk, the largest naval base in the world. Also, the Virginia International Marine Terminals composed of Newport News, Norfolk and Portsmouth are very important to the area.

Hopefully, you’ll enjoy learning more about Hampton Roads as you peruse the pages of this magazine. By the time you get to the end of it, you’ll realize what the locals know all too well — Hampton Roads is the place to be for business and family.